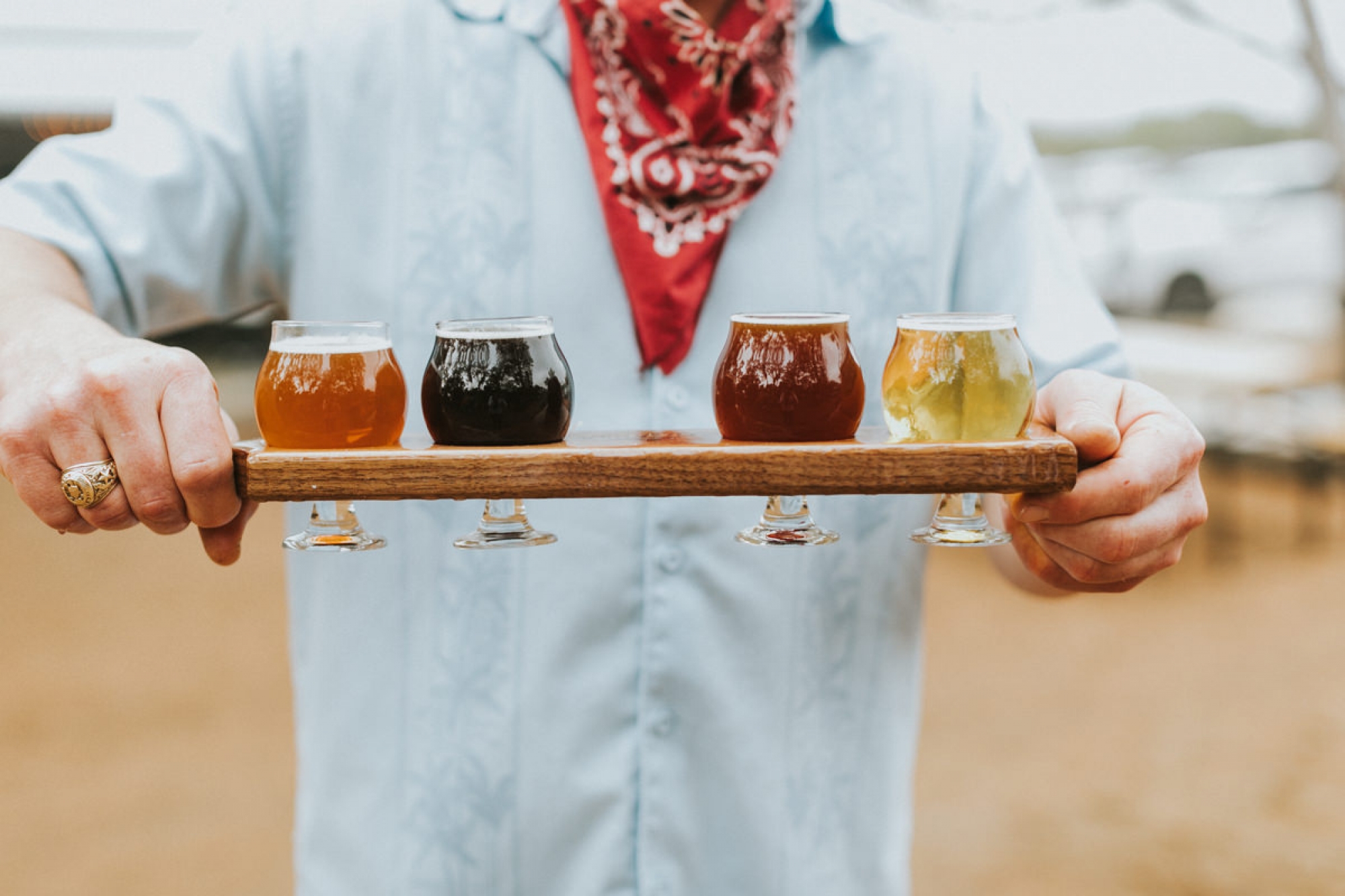 A light, crisp, and refreshing ale, our blonde is brewed with American 2-row barley, Centennial and Cascade hops, and a clean fermenting ale yeast.

Many countries have a version of Holiday mulled wine, but those flavors also work in beer! For our holiday beer we took inspiration from Swedish Glögg. Their mulled wine is made with orange peel cranberries and cinnamon. We followed suit but kept the spice levels balanced so no one flavor dominates. As with mulled wine, the flavors of this beer become more pronounced as it gets a little warmer. Hold it in your hands, gently warm the glass, and think happy yuletide thoughts!

We’re 2 years old! What better way to celebrate than with a Barleywine! Traditionally this style comes in two categories: Sweet and malt-forward English Styles and Hoppier high ABV American styles. Our's straddles the line between these two worlds. We used a malt profile firmly entrenched in the English malty tradition, but then stepped into the American side of things by using over 20 lbs of fresh picked Amarillo hop cones in the brewing process. This beer is bright, hoppy, and citrus forward now, but as it ages out it will start to express the rich malty undertones of a traditional Barleywine.

An all barley beer brewed with Weiss yeast (Think Hefeweizen). Sometimes beer legends stretch credulity and beer styles can be conjured from thin air. Dampfbier (German for Steam Beer) is one such beer style. The story goes that dampfbier was created because wheat malt was too expensive so Bavarian Weiss beer makes brewed a Weiss beer without wheat. The fermentation was so vigorous that it looked like “steam” coming out of the top of the open fermenters. In actuality Dampfbier refers to any beer brewed with steam fired instead of direct fire (Feuerbier) kettles. Steam was a new brewing technology in the 1800s and was thought to be a short-lived fad. But, hundreds of years later, our Dampfbier was brewed on a steam fired brewery system. Mythical legend or no, it makes for a tasty beer.

Brewed in collaboration with the iconic Texas beer bar Craft Pride, this beer draws inspiration from the Icelandic liquor called Brennivin. Brewed with roasted parsnips, rye malt, and a dash of caraway seeds, this beer is spicy, earthy, and perfect for cool fall nights.

We love collaboration beers! This cooperative effort between Red Horn Brewing, Fitzhugh Brewing and Community Culture Yeast Lab tries to capture a little of the Spirit of Texas in a glass. Made with ingredients that represent each of the Six Flags (Seis Banderas) that once flew over Texas. This pale ale is made with Spanish wheat, French pilsner malt, Mexican green corn, Texas yeast, dehydrated sugar cane juice from the south and American hops. Crisp, lightly hoppy, aromatic and refreshing! We hope you'll enjoy it!

Dating from 966 AD out of the Baltic regions of Europe, the Kvass is a study in resourcefulness. During difficult seasons or low crop years, farmers would still want their daily beer. Kvass makes use of bread for part of the mash to replace grain when grain stores were low. Our Ukrainian Kvass sticks close to these traditional methodologies. We used 100lbs of fresh Baltic Black bread from our friends Abbey Jane Bakeshop just up the road on Fitzhugh. We combined this with rye and barley malt and fermented it with bread yeast. The resulting beer is rich and deep in flavor, but also low in ABV and very drinkable. We hope you enjoy this unique offering. Budmo!

Thiols, linalool, geraniol and myrcene may not sound like tasty words, but they're what makes a Hazy IPA juicy and we've got the juice for sure! At nearly 3 lbs. of hops per barrel, this Hazy NEIPA is sure to satisfy those hopheads and juice lovers out there. Bright tropical fruit notes are balanced by a thoughtful malt bill and just the barest hint of grapefruit zest flavors from the different varieties of hops.

In the late 1600s the Russian Emperor, Peter the Great, fell in love with dark English beers during a visit to the UK. Thus was born the style of the Russian Imperial Stout. A strong dark velvety beer was made by UK brewers for transport to the Russian aristocracy. A strong hop presence helps balance the dark fruit, chocolate, and coffee notes of the malt. Our stout was aged on French oak that had previously been soaked in port wine to add an extra layer of fruity complexity. This beer is wonderful to drink right now and will also improve with age in your cellar.

"Winemakers Chris Brundrett, of William Chris Vineyards, and Andrew Sides, of Lost Draw Cellars, have joined forces to advance the reputation of Texas as a wine superpower! The new brand 'Yes We Can' is a collaboration crafted with pride to showcase the quality fruit provided by Texas winegrowers. Sway Rose is a canned Rose wine meant to be enjoyed by wine lovers from all walks of life, who are bound by a perpetual thirst for something delicious, different, convenient, and something that can proudly be shared pretty much anywhere! Sway Rose is 100% Texas grown and 100% Texas made."

Roussanne has an aroma of bright lemon, unripe pears and a hint of minerality. Palate has a combination of pear, lemon-lime, and crispy acid.

From Hye Cider Company, dry and crisp drinks like a Prosecco

Ask about our daily specials

cup of our house made salsa with fresh chips

Crispy chunks of seasoned brisket tossed with a sweet-spicy sauce

Bacon, Lettuce, Tomato with mayo served on a Croissant served with kettle chips.

Upgrade to Fries for $2 more

Smoked Angus brisket with Texas BBQ sauce, pickle and onion on the side

2 tacos with: Smoked skirt steak, pico lime slaw and a spicy roasted jalapeno sauce on flour tortillas (can be put on corn)

*can be put on corn tortillas and grilled

Menu items subject to change. Check out our nightly specials!

**We are not taking reservations, we have ample seating inside and out so it's first come first serve on tables**
**We do not take food orders over the phone, please come in to order thank you**

We are dog friendly, they are welcome on the patio and in the beer garden areas. Please pick up after your dogs and be respectful of the space. Thank you!

Per TABC rules we are following all Covid guidelines. Please let us know if you have any questions regarding this information.